Long Pants Under a Hot Sun

A novel about Africa, drinking and the meaning of life

In this chapter, Dublin visits the outdoor market in Lomé to find supplies for his new home.

Dublin stepped out of his taxi and onto the sand covering the Rue de Commerce. Money Road. The boulevard is home to the banks of Loma, scores of black market moneychangers and the largest outdoor marketplace in West Africa. The market is centralized in a three story building, but stretches out for several blocks in all directions, stuffed with chickens and jewelry and raw steaks blistering in the sun. On the first floor of the market, vendors push all kinds of food, from rice and millet to yams, peanuts, steaks, lamb and wild rat, peppers, spices and canned coffee. It smells. The great vendors of pagnes occupy the second floor. These are the famous Nanas Benz, the Mercedes Mamas. In West Africa, if you are fat, you are affluent. And these women are giants, physically and economically. They sell some of the finest cloth on the continent and often employ several servants. Usually the Mamas sit back and watch the transactions without actually doing any work. If there is a question of quality or price, they uncoil from their chairs, shaking their fingers and damning the doubts of the buyer. They are the ultimate in luxury and resilience.

On the third floor of the market building, Dublin bought a green coffee cup and two orange bowls, a bucket for rubbish and a large orange washbasin for laundry.

Back out on the street, a young boy carrying a goat walked by him as he passed a shaky table of rotting roma tomatoes and green bell peppers, while a woman balancing sixteen large suitcases on her head slid by a girl selling scissors and toilet paper. He was looking for soap through the arms and legs of two hundred people slipping around each other like bait in a bucket. He didn’t know yet that some people sold their goods in the same place every day, that some of them had lower prices or better quality than others. Expatriates and tourists built up legends about such people, such as the flip-flop vendor across from Ecobank, the mask seller in tiny Woodworkers’ Alley, and the cassette vendor circling Boston Pub. He asked two or three people where to find soap, but they shook their heads.

Just then, he felt a leathery, cool hand crawl into his, and he turned to see a tall man in American clothes and dark sunglasses standing next to him. As time passed in Africa he almost got used to holding men’s hands, which felt odd sometimes, reassuring at others. But he didn’t know this man at all, and we are all familiar enough with American culture to know that it was uncomfortable for Dublin. He left his hand there, anyway.

“Hey, man, let me tell you about Alice.”

Oh, great, Dublin thought. A crazy. But the man started up again.

“Yeah, you new to Togo, so you need to see Alice. She have acrobats.” He looked over the top of his glasses. “At the home of Alice.”

“Chez Alice. Hotel in Lomé. For the white people. But they have acrobats there, and you like it.”

“Yeah! They great. Come and see it on Wednesday night when the sun go down. I will look for you there. But now you come with me, I show you around a little bit.”

They walked around the market for another hour or so (he knew a friend who sold soap), and Dublin bought him a Fanta for his gratitude. He learned a lot in that hour and was shown secret places he may have never found on his own. The woodworkers in the Alley of the Grand Market pressed him as he visited their stalls. Men and boys chattered at him and showed him masks plated with silver and beaded with small white seashells. They took him to a small café to eat fufu with chicken sauce, but he wouldn’t try it. They laughed at him. They told him about the fetish markets that sold monkey skulls and magical branches that produced large erections. Boys with wooden cartons filled with cassette knockoffs of American pop singers and young Indian divas clamored around him. Girls begged for francs, pulling on his T-shirt. There were no old men, and no couples with children. This was not a family neighborhood. This was all business, and it was the closest thing to the empty America Dublin knew. The differences were that Dublin could sense nature and life all around him in Lomé, and people were outside under the open sky, and lips didn’t remain tight for even a second when strangers met. It was Money Road, but the human beings had cast off their masks.

These are some of the kids who lived near my house in the neighborhood of Kodjoviakope in southwest Lome, the capital of Togo. The name of the neighborhood means “Village of Kodjo,” and it includes the border crossing into Ghana. I spent many hours drinking beer and befriending moneychangers on the street that ran to the border.

But back to the kids… They were wonderfully happy children and never got tired of calling me Yovo (white person) and telling me “good evening” in French. They liked to listen to me play my blue guitar I bought in Lome, which they named “Elvis.” And once they helped me catch a chicken. 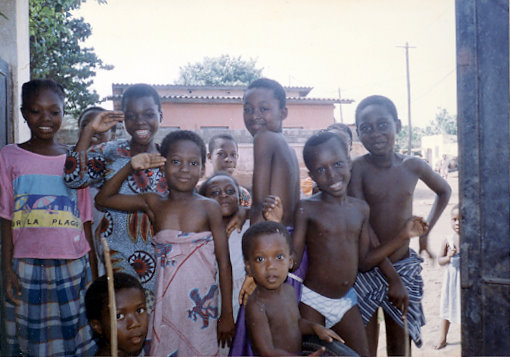 In this chapter, Dublin, a student who has traveled to Africa to learn the meaning of life, is just getting to know his new home.

The next few days passed out of memory as soon as they happened. With nothing to reference, Dublin’s mind could anchor only a few sounds and smells, feelings and sights. There were short taxi rides, and spectacular clothing, certain large baobab trees and rotting homes, the smell of gasoline and garbage. He tried to record some of his experiences on a micro cassette recorder, but on later review, they did little to color in the black and white line drawings of those first few days.

The first morning at the American Recreation Center, he left his comfortable room and walked down a hallway with lime green floor tiles to the yard, where there was a pool, tennis courts, and a man selling hamburgers and Snickers bars. The Center was rarely used; Togo’s golden years of tourism had atrophied with every violent election. A few Peace Corps Volunteers wandered in from time to time, some diplomats with their children on the weekends. A concrete wall surrounded the compound, topped by a line of broken glass to keep out intruders. Dublin had never seen anything like it. He wanted to try climbing over it.

After three days of drinking Cokes and writing journal entries, with no sign of the woman who had picked him up at the airport, Dublin asked the guard to find him a taxi. He had walked around the outside of the Center that morning but was intimidated by the stares he got. By mid afternoon he was feeling braver. He took the taxi down to the ocean to take a look around and found a hotel just off the beach that served sandwiches and cold beer. The rooms were small, but cheaper than those at the Center by a few dollars, so he decided to move. The guard at the Center warned him about wandering the beach after dark and wished him well.

Dublin had plenty of time to daydream at the hotel. A middle-aged man, half French and half Vietnamese, owned the hotel with his wife. She had given it the name Hotel Galion. They rented an empty lot across the street for live music on Saturday nights. Business was slow, despite clean rooms and incredible beef and carrot sandwiches for less than 1600 CFA.

There are 100 African francs for every French franc. There are five or six French francs to the dollar. Dublin had done the conversion wrong in his head at first. He thought cigarettes cost sixteen dollars per pack. I should quit, he thought. Then he realized they were only a quarter a pack. I should get some smokes, he reconsidered. Marlboros were more expensive, but he found British cigarettes for as little as fifteen cents. At that discovery, he felt like Columbus.

Nicotine would prove essential for him there. Many moments call for tobacco, and he was determined to conquer every single one. Besides, he was too young to appreciate the costs of tobacco. He classified his entire experience in Africa as a special occasion, his loophole for smoking whenever the voice told him to quit. He had lots of literary evidence backing him up. Ayn Rand had written something about the fire of imagination invoking itself in the ember at the end of a cigarette, just inches from the human mind. How can the case for smoking be broken with such powerful advocacy?

This is the paved highway that runs along the coast in Lome, Togo. It’s my first ride on a moped taxi, and I’m on my way to the house I rented in the neighborhood of Kodjoviakope. You can see the beach on the left. There are two kinds of beaches in Lome: soccer fields and pooping grounds. Be careful where you kick! 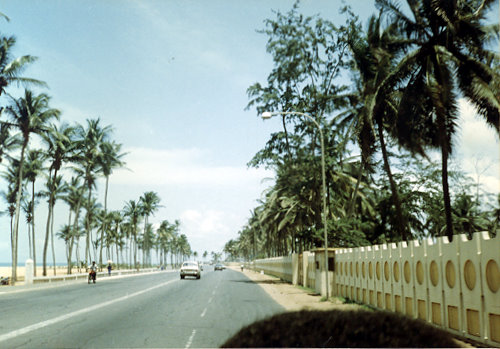 This is the space between getting and got.

You know what I mean – the time that nobody documents in a biography, the time between “worked part time at a grocer in his early 20’s” and “had his first manuscript published at 35.” Have you ever wondered what happened in between doing nothing and getting discovered? How did these people spend their time? And what did they do special to achieve their dreams? How did the manuscript get read?

How many people read it first and thought it was garbage?

So far, that number is 3. Three agents have rejected my first novel, Long Pants Under a Hot Sun. But hey, everyone has an off day here and there. I don’t hold it against them.

So I’ve decided to document this time, this space between the last letter of Long Pants and the first edition. The fun part is that you get to watch the rejections pile up with me – just think of the anticipation – how many will I get? How long will it take? As if that weren’t motivation enough, I’m also going to post excerpts from the book. Take a few minutes at work or on the train to find out who Dublin is, and why he’s in Africa, and why it’s so important to drink a lot in Africa, and why albinos make good friends, and why you should never give French Scotch to an African king, and why blind people farm, and why we sometimes don’t realize when people have fallen in love with us, and maybe, just maybe, what the meaning of life is.

And how Dublin screws that up too.