Long Pants Under a Hot Sun

A novel about Africa, drinking and the meaning of life

In this chapter, Dublin and the Norwegians witness a terrible accident in Ouagadougou. 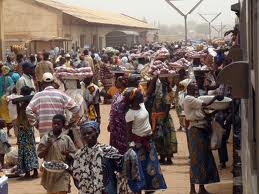 On their last day in Ouagadougou, Dublin, David and Vegard decided to go for a walk downtown. FESPACO had ended in the morning with a ceremony celebrating the filmmakers, and the streets were crowded by tens of thousands of tourists buying trinkets and T-shirts before leaving the city. The three travelers pushed their way through threads of human beings that weaved a basket of enormous clamor. They all felt a strand of euphoria whenever the lines moved a few good feet. Dublin’s legs felt very far away from him.

“Fuck this,” David muttered. He put his bald, sweaty head down and pushed harder against the people in front of him. They made their way past astonished whites and begrudgingly passive blacks and found themselves at last on a street with a greatly diminished population. Vegard spit on his hands and rubbed them together. Dublin looked down and noticed that he now had new palm prints of dust and saliva. They swirled in the currents of world travel. Good for passports, perhaps.

“I could eat all the food in Africa!” David screamed at the sky.

“What would that amount to? A half a plate of rice and a dead rat?” Vegard joked. Dublin shook his head. He wanted to be at a football game, cold under a blanket, maybe a freezing mist coming down from the Midwestern sky, fans of one team staring at fans of the other team across the field. Shaking bleachers and cheerleader splits and coming back to consciousness when a big play erupts with people shouting–

“Holy shit!” David screamed at the same time the sound of catastrophic tires reflected off the downtown store fronts. Dublin whipped his head around just in time to see a light blue Dodge pickup spinning like a Detroit football over the crossroads they had just passed. Time was so surprised that three seconds took twice as long to pass as usual. The pickup came down at last on top of people walking through a display of bicycles and slid several feet through the plate glass window in the storefront. It was a strange and exciting moment, to realize they had just seen many people die at once, perhaps squeezing a bike tire or pressing a hand brake as the shroud fell over them. Time tried to get all the noises of the accident to stop at once but had a hard time handling them. Within moments, two hundred people had constricted the accident scene.

“Are they helping, or looting, or what?” Dublin asked without really listening for an answer. None was given. It was the same reaction from all Africans when an important event happened. If someone was accused of pick pocketing, if there was an accident, if someone was hurt, if there was shouting or humiliation or celebration, the hordes descended. Dublin saw it time and time again over the next few months, but this was the first time.

“They didn’t walk. They were pushed,” Vegard responded. Dublin looked from one to the other to the crowd and back. He could still hear metal against concrete and bone. His ears felt uneasy. Dublin lost his hearing for a moment as they got themselves together again.

“Do we really need to stay and watch this?” Dublin asked.

“Of course. We must see this so we can learn what there is in the world. There is death, Dublin, and you mustn’t ever forget it.”

“But he doesn’t need to obsess about it like you do,” Vegard reprimanded his friend.

“Obsess? Obsess? I am anything but obsessive, brother! Obsess, he says!” He turned to Dublin. “In our short time together, little boy, would you admit to finding me obsessive?”

“There you have it!” He faced the intersection of hundreds, now a crossroads of living people keenly interested in dead people. “I, do you hear me all? I am anything but obsessive!”

“It is plain to see,” Vegard mumbled. David harrumphed. They stared a little bit longer.

“Well, shall we get back to the hotel?” Dublin asked. They nodded. From their spot on the sidewalk, the crowd was one mass of dusty interlopers into the contract of death, like two hundred lawyers swarming around a celebrity annulment. It had just happened, and the families of the victims had no clue anything had changed in their lives. They went about their business preparing dinner and going on walks and sleeping with the peace of “Everything’s OK”, the dreadful stretch of hours between death and knowing about death. Only God could truly observe, and it’s hard to imagine what emotions were his companions. A sad but old story of life at its end.

The heels of Dublin’s sneakers marked the sidewalk as they finally turned away from the accident that scuffed his consciousness. He didn’t forget it for days, and out of everything that happened that week in Burkina Faso, it’s the one moment he took away and preserved. It was a short video he liked to play in the theater of his memory whenever he felt tempted to take life at its best for granted.

Morbid, perhaps, but probably another step closer to making an effort at humility.

One thought on “Death by Flying Truck”